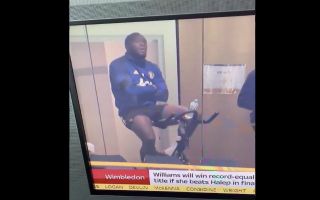 The Belgian is currently in Australia with the Red Devils squad ahead of a pre-season tour, despite ongoing speculation regarding his future at Old Trafford.

The 26-year-old has been heavily linked with a transfer to Inter Milan and according to Metro Sport, talks with United over a move have already begun, with San Siro boss Antonio Conte desperate to complete a deal.

Lukaku sat out Wednesday’s training session in Perth after sustaining a slight knock and took part in gym-based training instead with Anthony Martial, but he was caught on camera yawning on his exercise bike.

The centre-forward is clearly not taking his duties at United seriously ahead of the upcoming season and it now seems very likely he will move onto a new challenge in Italy before the transfer window slams shut.

???? Manchester United trained at the famous WACA stadium in Perth today as their pre-season gets going.

Romelu Lukaku and Anthony Martial were restricted to gym work after picking up knocks pic.twitter.com/gxpmQVmOrv

Nothing like putting in some hard graft………? #Lukaku pic.twitter.com/CaG5ZFVxMV