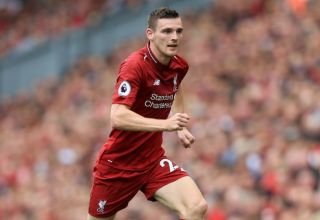 Liverpool left back Andy Roberton has undergone surgery on his hand.

The club reported on Saturday that the Scotland captain had “undergone a minor procedure on his hand after picking up an infection”.

Liverpool state that the 25-year-old’s injury delayed his participation in pre-season tests but he is set to join up with his teammates in the USA next week.

Reds fans will be relieved to hear that Robertson is unlikely to miss any serious matches on account of his infected hand.

Liverpool began their pre-season schedule on Thursday with a 6-0 win over Tranmere Rovers. They play Bradford on Sunday before jetting off to the States.

While in America, Jurgen Klopp’s men take on Dortmund, Sevilla and Sporting Lisbon.

They then return to the UK to face Napoli at Murrayfield, before hosting Napoli at Anfield.

August is a busy month for Liverpool and gives them the opportunity to win two trophies. They first face Manchester City at Wembley for the Community Shield, before going to Istanbul’s Vodafone Arena for the UEFA Super Cup against Chelsea.