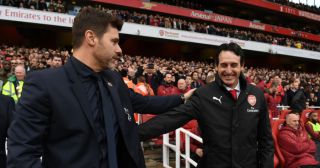 Arsenal have reportedly joined the transfer scrap with rivals Tottenham and Juventus for Roma starlet Nicolo Zaniolo this summer.

The 20-year-old impressed for the Giallorossi last season, scoring four goals and providing two assists in 27 Serie A appearances.

SEE MORE: ‘Shame on you’ – Arsenal legend blasts who he believes is responsible for Koscielny controversy

Coupled with his technical quality, energy and tenacity to offer something going both ways in midfield, he would arguably be a top signing and well suited to the Premier League.

As noted by Calciomercato on Friday morning, it had been reported that Tottenham were set to meet with Roma to discuss the talented starlet, with an offer consisting of €40m in cash coupled with Toby Alderweireld being included in the deal said to be on the table for the Italian giants to consider.

Given Roma sold Kostas Manolas to Napoli earlier this month, they would surely welcome the idea of bringing in a replacement for him while also pocketing a significant fee to reinvest back into Paulo Fonseca’s squad this summer.

However, it appears as though Tottenham face competition for Zaniolo, as Calciomercato have since added, via the paper edition of La Gazzetta dello Sport, that Arsenal are also keen on the Italian international and will now potentially look to hijack the swoop from their bitter rivals.

Given Spurs can offer Champions League football and appear to be in a stronger position in the more immediate future to compete for major honours, they perhaps hold the key advantages if Zaniolo is open to an exit from the Italian capital and is ready to accept the challenge of playing in England.

Nevertheless, given Unai Emery’s need for a midfielder with his qualities, especially after Aaron Ramsey’s exit on a free transfer to join Juventus, Zaniolo could be swayed by the opportunity to have a fundamental role at the Emirates.

Time will tell if any official bids are lodged and whether or not they are accepted, if so, then Zaniolo may well have a decision to make this summer on his future.