Premier League giants Arsenal have been linked with a sensational swoop for this superstar, the ace is a proven winner and would solve one of their current crises.

Spanish journalist Alvaro Levrero has sensationally claimed that superstar Dani Alves is close to signing with Arsenal, the former Barcelona star is a free agent after leaving Paris Saint-Germain:

Free Agent #DaniAlves would be #Gunner shortly. As @Arsenal realised swiss #StefanLichtsteiner, #Unai needs a strong option to start #Premier in right back position until #Bellerin's plenty recovering. Despite his age the #Brazilian form is more than excellent.

Levrero suggests that the Gunners’s hierarchy have realised that they can’t go into next season without a well-established right-back, the north London club are short-staffed following the departure of Stephan Lichsteiner and given the serious injury that Hector Bellerin is recovering from.

Even at 36 years of age, Alves has shown that he’s more than capable of delivering world-class performances, the star was phenomenal for Brazil in this summer’s Copa America and showed no signs of slowing down for PSG last season.

Alves secured his place in the history books after Brazil’s Copa America triumph by becoming the first player ever to win 40 trophies:

Arsenal are in desperate need of adding a right-back this summer, 21-year-old Ainsley Maitland-Niles has deputised well in the position but the Gunners could be risking his development by continuing to play the ace in defence next season. 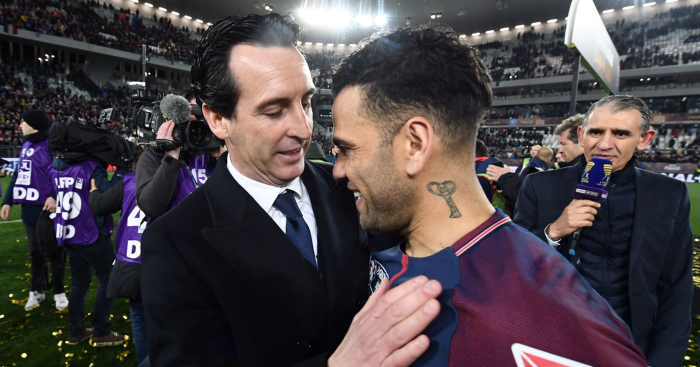 As well as solving Arsenal’s defensive crisis, Alves would be adding a winning mentality to the Gunners dressing room. The 36-year-old has won 40 major trophies during an illustrious career with Sevilla, Barcelona, Juventus and PSG.

Alves has cemented himself as the most decorated player in history, Arsenal could do with the Brazilian’s magic when it comes to getting his hands on silverware.