Premier League side Arsenal are set to rivals La Liga giants Real Madrid for the signing of this talented youngster, the ace has a release clause of £9m (€10m).

The 21-year-old shot-stopper has a release clause of £9m (€10m), it’s understood that Las Palmas are sticking to the ace’s release clause and they aren’t prepared to sell for anything less.

Martinez only made his first-team debut for Las Palmas in Spain’s Second Division in April, however, the stopper has managed to establish himself as the club’s first-choice, making 7 appearances in the final stages of last season. 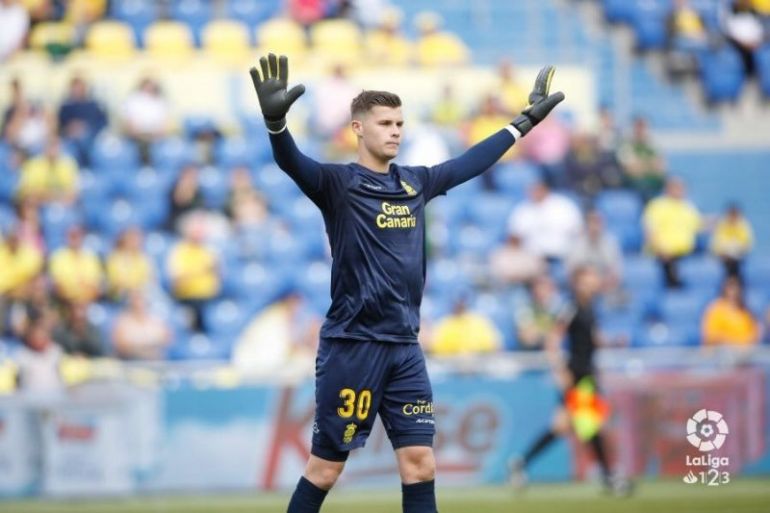 Josep Martinez in between the sticks for Las Palmas last season.

It’s understood that Martinez is comfortable at the club, as he’s been afforded the chance to shine in the first-team by former West Brom boss Pepe Mel. News of interest from two powerhouses in Arsenal and Los Blancos could change the star’s stance though.

Martinez was formerly on the books at Barcelona, the stopper spent two years at the world famous La Masia academy before joining Las Palmas in 2017.

Unai Emery is in desperate need of adding a goalkeeper to his ranks this summer, following the exits of Petr Cech and David Opsina – the Spaniard needs to find a worthy competitor to Bernd Leno.

Arsenal’s second-choice for next season is set to be Emiliano Martinez, the 26-year-old Gunners academy graduate has barely made any first-team appearances, but spent the second half of last season on loan at Championship side Reading.