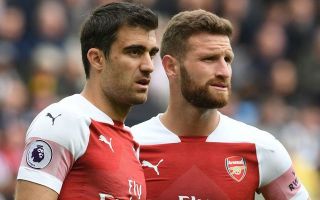 Shkodran Mustafi reportedly wants to fight for his place at Arsenal despite the club being keen to get rid of him.

Arsenal manager Unai Emery wants to let go of Mustafi, who earns £120,000 a week, according to the Mirror but the same source claims that the player has other ideas.

The Gunners are therefore struggling to offload the German – who joined Arsenal from Valencia in 2016 for a transfer fee in excess of £35 million, as reported by BBC.

Arsenal are currently in the USA for their first pre-season friendly against Colorado Rapids. Mustafi has travelled with the squad to the US, which is evidence that he is keen to fight for his place in the squad.

Mustafi did manage to score three goals last season but his performances at the back were poor. This is perhaps why he hasn’t been snapped him up.

Arsenal need to bolster their squad improve their defence if they are to play Champions League football in the 2020/21 season. However, the Gunners have a very low transfer budget which is £40 million, according to BBC.

Raising funds is another reason why Unai Emery wants to sell Mustafi. Things have gotten even worse for the Gunners as they have confirmed on their website that Laurent Koscielny decided not to travel to the United States with the rest of the Arsenal. This is enough to suggest that Koscielny wants to leave the club.

Provided Koscielny does leave the Emirates, the only recognisable centre-backs left with Arsenal are Sokratis Papastathopoulos and Shkodran Mustafi. The other centre-backs the Gunners have are youngsters Rob Holding, Calum Chambers and Dinos Mavropanos.