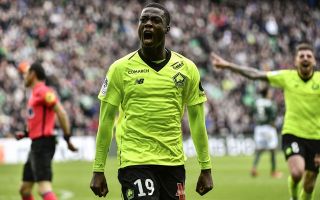 Lille forward Nicolas Pepe has been linked with yet another club this summer, with his agent hinting at a possible move to domestic rivals and French giants, Paris Saint-Germain.

In an interview with L’Equipe, Samir Khiat, Pepe’s agent, has been quoted discussing his client’s future, revealing:

“Nicolas is open to everything. The aim is for him to sign in the right place. PSG is a possibility. I cannot say on the 12th July that he will sign for PSG. Today, all parties need to reach an agreement. Lille, the buying club and us. There are exchanges and discussions. He is wanted by a considerable number of clubs. For him, the most important thing is to be wanted and to go to a good club, in which he will play and continue to progress.”

It was only a matter of time before the Ivorian was linked with Ligue 1 champions PSG, with growing concern at the Parisian club over the future of world record signing Neymar and a potential return to Barcelona, as reported by the Express.

Pepe has already been linked with a host of clubs this summer including Liverpool and Bayern Munich, according to the Metro, as well as Manchester City and Barcelona, claim Don Balon, with PSG the latest to now join the queue.

The Ivory Coast international excelled for Lille in Ligue 1 last season scoring 22 goals and providing 11 assists, a contribution that would be welcomed wherever he plays his football next season.

However, prising him away from Lille could be more difficult than anticipated with the French outfit being able to offer Champions League football themselves after finishing 2nd in Ligue 1 last season.

He isn’t short of interest from around Europe though based on the reports above, and so it remains to be seen if he seeks out a new challenge ahead of the new campaign with the likes of Liverpool and City now facing increasing competition it seems.