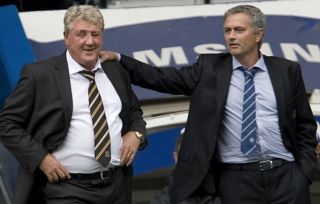 You have to feel sorry for Newcastle fans, as they’ve had put up with a lack of investment and relegation recently.

Now, they’ve gone from the prospect of a takeover and Jose Mourinho taking charge to trying to lure Steve Bruce from Sheffield Wednesday.

There was some excitement for Magpie fans last month, as The Mirror reported that Jose Mourinho would be willing to speak to the new Newcastle owners, should a takeover bid go through.

Understandably, they haven’t reacted with tremendous excitement to the BBC’s report that states that the club have been in talks to bring Steve Bruce in as the next manager.

The Newcastle job is available after Rafa Benitez left the post in the summer, having been unable to agree a new contract.

Bruce isn’t an inspiring appointment given his time as Sunderland manager, and his average record with various English clubs.

He did manage an FA Cup final with Hull City, but an overall win percentage of 38.5% isn’t wholly inspiring, especially when you consider he spent a lengthy amount of time managing in the Championship.

It must be said that nothing has been confirmed yet, however judging by some fan reaction on Twitter, it’s fair to say it’s not a positive outlook from the Newcastle faithful.

Some are even unhappy at the link, with others furious that previous players and managers have appeared in the media attempting to spin it positively for Newcastle.

It’s almost laughable how we’ve gone from being linked with Mourinho to Bruce within a month! Only at #NUFC eh?!

So @SkySportsNews have gone to the bother of digging out John Carver to blatantly lie about the support Steve Bruce has in the North East. Confirming once and for all they’re in Ashley’s pocket #NUFC

Even fans of other clubs have come out to feel sorry for Newcastle fans.

You have to feel sorry for @NUFC fans. In the space of a month they’ve nearly been took over by oil billionaires.. undecided on Rafa or mourinho to take them to the summit of the league.. to now being linked heavily to Steve fucking Bruce ? #NewcastleUnited #football

Never thought I’d say this, but I’d fee genuinely sorry for Newcastle fans if Steve Bruce goes there. Horrific mismanagement of the club.

To make things even worse for Steve Bruce, fans of his current club Sheffield Wednesday are furious with him for holding talks with Mike Ashley:

No return for him at #SWFC , made it clear he doesn’t want to stay. I hope the #SWFC chairman milks Mike Ashley for every last penny. Just shows the type of bloke Steve Bruce is

So Steve Bruce you were given the opportunity to finally manage a big team in Sheffield Wednesday and now you want to up sticks and leave after less than half a season and with the new campaign just around the corner.
If you go I hope you fail and end up on the scrapheap https://t.co/CJlfZIyRcM