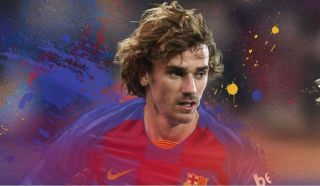 Barcelona confirmed the signing of Antoine Griezmann from Atletico Madrid on Friday, and the Frenchman has wasted little time in getting the fans onside.

As per the club’s official statement, the Catalan giants have paid €120m to prise the World Cup winner away from their La Liga rivals, activating his release clause with the bid.

Griezmann has penned a five-year deal and while he is scheduled to arrive in the city on Saturday night for his first photo shoot, he will be officially unveiled to the media on Sunday.

However, as seen in the video below, he has already delivered his first message to the Barcelona fans, making a key vow to them as he looks to help deliver further major trophies in the coming years.

“When I was a boy, my dad taught me that trains don’t come around just once,” he said. “Now it’s time to take on the challenge of a new destination.

“Finally, our paths cross. I’ll defend the Barca colours with all my determination and commitment. It’s our time. This is our path.”

Time will tell how coach Ernesto Valverde finds a balance in his squad and starting line-up, with Griezmann widely expected to form an attacking trident with Luis Suarez and Lionel Messi.

What that means for the likes of Philippe Coutinho and Ousmane Dembele remains to be seen though, as Griezmann’s arrival at Barcelona could certainly adversely affect their playing time next season as the latest superstar signing will expect a starting berth if in form and fully fit.

?? Life is all about second chances. pic.twitter.com/5ArFiaP2ht