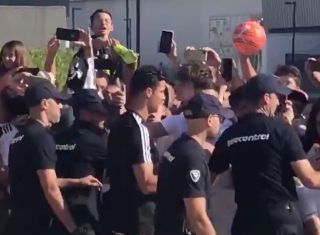 Cristiano Ronaldo reported for his first pre-season training session on Saturday and the Juventus fans had a message for him outside the training ground.

The Portuguese superstar joined the Turin giants last summer, and helped deliver yet another Serie A title for them in an impressive first year in Italy.

However, they fell short in both the Champions League and Coppa Italia and so they still have things to work on, with Ronaldo undoubtedly set to be the man tasked with leading that charge under new boss Maurizio Sarri.

As seen in the video below, Juve fans flocked to the training ground to see their talisman this weekend as he reported for medical tests, and they had a clear message for him as they chanted: “Bring us the Champions League”.

Given his incredible record in the competition as a five-time winner, that is ultimately what Ronaldo was brought in to do as Juve were already dominant domestically.

Having signed the likes of Aaron Ramsey, Adrien Rabiot, Gianluigi Buffon, Merih Demiral and Cristian Romero this summer, they will certainly back their chances of competing on multiple fronts next season, while it could yet get even better with a move for Matthijs de Ligt said to be in the works, as per De Telegraaf.