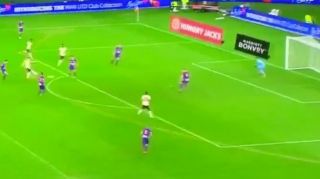 The Red Devils had taken the lead through Marcus Rashford in their first pre-season outing during their tour in Australia.

As seen in the video below, Garner made it 2-0 as he latched onto a poor pass out from the back and took a superb first touch to set himself for the shot and produced a brilliant finish to find the back of the net.

It was a quality piece of individual skill from start to finish, and the 18-year-old will undoubtedly be delighted to have made his mark for Man Utd so early on in pre-season.

He’ll be hoping that’s the start of a strong run of performances to stake his claim for involvement when the competitive games get underway next month, while there was an interesting statistic that emerged after he scored.

As seen in the tweet below, Garner became the first Man Utd academy graduate to score his first goal for the Red Devils under Solskjaer, and given the expectation is that the Norwegian tactician is going to give youngsters a chance to come through the ranks moving forward, Garner may well be the first of many.

James Garner is the first Man Utd academy graduate to score his first goal for the club under Ole Gunnar Solskjær.

You get the feeling he won’t be the last. ? pic.twitter.com/VfIBUbfmsf