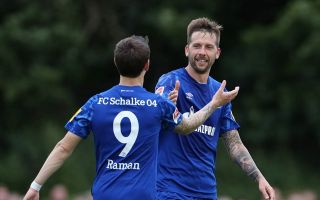 Whilst it’s common for Bundesliga teams to begin their pre-season campaigns with games against vastly inferior regional opposition, it is uncommon for them to score 20 goals in the process.

That was the situation yesterday, as Schalke travelled to Bottrop, within the North-Rhine-Westphalia region, to take on Stadtauswahl Bottrop, an all-star team put together with players from the clubs of Bottrop to celebrate the town’s centenary year.

The one-sided affair unsurprisingly finished 20-1 to the visitors and saw Guido Burgstaller score a double hat-trick whilst Steven Skrzybski scored a more traditional, regular hat-trick. The list of scorers was so long that it took Schalke’s twitter account two individual tweets to list the scoring in chronological order.

Former Huddersfield Town manager David Wagner has taken over the reigns at the VELTINS-Arena for the upcoming season and will be encouraged by his team’s attacking potency, regardless of the level of the opposition.