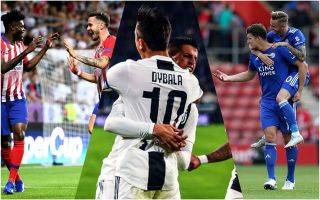 With around three and a half weeks left until the Premier League transfer deadline, it’s time for the big six to get serious about their signings as so many are still to address major weaknesses in their squads.

Manchester United have only signed two young and relatively unproven talents in Aaron Wan-Bissaka and Daniel James, while Arsenal desperately need to get their act together after so far only signing young Brazilian striker Gabriel Martinelli.

We’ve put together a list below of the one player each of the big six still needs in the final weeks of the transfer window.

Of course, we’re not including Chelsea in here due to their transfer ban, but read on for our transfer picks for Man Utd, Arsenal, Liverpool, Tottenham and Manchester City…

It’s not easy to strengthen such a quality side, but Manchester City could perhaps do with a slightly better right-back than the erratic Kyle Walker.

Calciomercato, citing Tuttosport, state that Juventus’ Joao Cancelo is a top target for Pep Guardiola’s side and that a deal could be close.

The intelligent and versatile Portugal international could be just that little bit better than Walker and give MCFC a squad more capable of going all the way in the one competition that’s eluded them – the Champions League.

Tottenham reportedly seem set to hijack Arsenal’s move for Saint-Etienne wonderkid William Saliba, as per David Ornstein in the tweet below:

Negotiations between Arsenal, Saint Etienne and Saliba were in their very final stages – much of it already in the hands of lawyers to agree wording of contracts etc – but Tottenham have reignited their interest and are now pushing hard to get the deal completed #AFC #THFC #ASSE https://t.co/8uihItY3eS

With Toby Alderweireld linked with Roma by Calciomercato, there’s no doubt Spurs could do with replacing him with a young centre-back.

Saliba looks to be up there with the finest young defensive players in Europe, and could improve even more under Mauricio Pochettino.

It just remains to be seen if Tottenham can ensure they sign Saliba straight away and don’t have to loan him back to Saint-Etienne for next season.