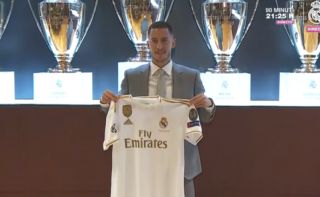 Real Madrid’s new signing Eden Hazard has reportedly requested the number 23 shirt at the Bernabeu after his summer transfer from Chelsea.

Although this decision is not yet final, it’s claimed by Marca that the Belgium international could follow in the footsteps of David Beckham in wearing 23 for Los Blancos.

Some may have expected Hazard to go for a more traditionally special number for attacking players, such as 7 or 10, but neither are currently available.

The 28-year-old wore 10 at Chelsea, but Luka Modric is unlikely to give that up any time soon, while Mariano Diaz is also said to not be keen on giving up his 7 shirt, according to Marca.

Still, the Spanish source claims Hazard is a big basketball fan and would therefore be happy with the 23 shirt, famously worn by basketball legend Michael Jordan.

We’ll surely hear something official soon, with Madrid fans surely desperate to buy a new shirt with their big-name summer signing on the back.