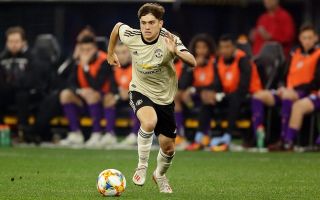 Welsh winger Daniel James made his first appearance for Manchester United yesterday after his summer move from Swansea City, as the Red Devils locked horns with A-League side Perth Glory in a pre-season friendly in Australia.

United won the game 2-0 comfortably, with second half goals from Marcus Rashford and youngster James Garner. Dan James was given a starting role on the left-wing, flanked by the experienced former England international Ashley Young at left-back and revealed in an interview with MUTV the advice he gave to Young during the game.

“As soon as I came in I made sure I told the full-backs my strengths and how I like to play,” he said.

“I think Youngy also showed that he could go inside and play as that third central midfield player and he was playing me in quite a lot.

The news will come as a pleasant surprise to Manchester United fans with James showing confidence and not being daunted by the magnitude of playing for a club of United’s stature or his vastly more experienced team-mates.

James will offer a fresh, new dimension to United’s attacking arrangement due to his mind-blowing pace, on and off the ball. James shot to attention in February this year after a stunning solo goal against Brentford in the FA Cup 5th round went viral.

James picked up the ball on the edge of his own box before dribbling at least 75 yards and coolly slotting home in a moment of brilliance that showed his electric pace and finishing prowess.

And as well as talent, it seems clear the 21-year-old also has the personality to be a success at Old Trafford and provide some much-needed leadership and communication to this under-achieving squad.