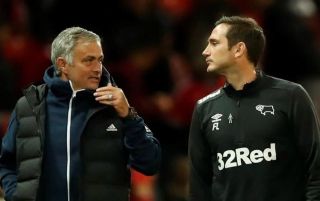 Former Chelsea manager Jose Mourinho has given a surprise response to one of his former star players Frank Lampard landing the Blues job this summer.

The club legend recently replaced Maurizio Sarri in a surprise move by Chelsea, who have opted for an inexperienced name for such a big job.

Lampard was one of Chelsea’s best ever players, but has just one season of management with Derby County under his belt.

Some of the former England international’s best moments of his career came under Mourinho, particularly in his first of two stints as Chelsea manager, but it seems the Portuguese isn’t particularly keen to endorse his former favourite.

When asked about Lampard’s appointment at CFC, Mourinho dodged the question as he was not keen to talk about football.

‘I don’t speak about football. My football? I have no football now,’ the former Manchester United and Real Madrid boss told Sky Sports, as quoted by the Metro.

This seems strange given how much Mourinho used to praise Lampard when they worked together in the past, but perhaps he really just doesn’t want to focus on any goings-on in football until he’s back in the game.

The 56-year-old has, unsurprisingly, been linked with a whole host of top teams since being sacked by Man Utd last year, but remains out of work and has focused on punditry instead.