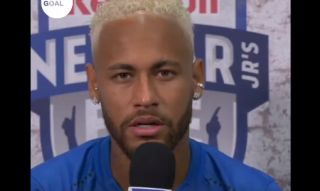 No one does a petty transfer saga quite like Neymar, as he shows in the video below.

With constant headlines linking the Paris Saint-Germain superstar with a transfer back to his old club Barcelona, there was only going to be one answer when he was faced with the question about his best memory in football.

As you can see in the video clip below, Neymar, who has played over 500 professional matches, one of those being a Champions League final in which he scored, a couple of others of those being World Cup games hosted in his home country, went for the one game guaranteed to annoy his current employers PSG.

‘My best memory as a footballer? When we won against PSG with FC Barcelona,’ he said.

‘What we felt when we scored the sixth goal I never felt something like this, it was incredible.

‘When we won against PSG with Barcelona it was completely… we all went crazy afterwards!

‘I believe it was the best possible feeling for all of us.’

Sky Sports recently reported on Barca’s interest in re-signing Neymar, saying they would be prepared to sell some big names to fund the move.

We’re no psychologists, but we can safely assume from the video above that the 27-year-old would probably be pretty happy about that.