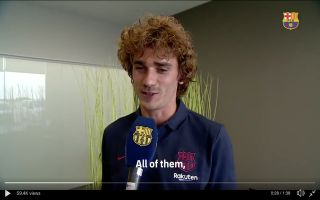 Superstar Antoine Griezmann has revealed that he’s aiming to ‘win everything’ with Barcelona following his €120m switch from Atletico Madrid.

Antoine Griezmann completed his long-awaited transfer to Barcelona yesterday, the Frenchman has been one of the Catalan giants’ prime targets in recent years. According to the club’s official website, the attacker joins from Atletico Madrid on a five-year deal after his €120m (£108m) release clause was paid by the La Liga champions.

Spanish publication AS have revealed that Griezmann will be taking Philippe Coutinho’s No.7 shirt at the Camp Nou.

The superstar revealed that he was aiming to win everything with Barcelona following his marquee switch, Ernesto Valverde’s side will be eager to get their hands on the Champions League, the club haven’t won the top piece of silverware since 2015.

Check out what Griezmann had to say below:

Here’s what Griezmann had to say to Barca TV following his move:

“I’m very happy, very excited and looking forward to working with the squad and meeting my new teammates,”

“I have new challenges here, new targets, and I hope I can do as well as I can, as I have been doing for club and country.”

“I’m aiming to win all of them, the Copa del Rey, La Liga and the Champions League, those are my goals and the club’s and I hope to win them all here.”

“I already have a good relationship with Samuel Umtiti and Ousmane Dembele, I’m looking forward to seeing them and having good times with them here.”

“For me, playing alongside Messi is a joy. I want to know what it’s like to train every day at this club.”

“I’m really looking forward to working with my new teammates and the boss, I’m excited to play at the Camp Nou.”

“I have fun on and off the pitch. I hope I can bring a lot of joy to the fans and we can all enjoy together.”

Barcelona looked destined to complete a stunning treble last season, however, Ernesto Valverde’s side collapsed against Liverpool in the Champions League Semi-Finals, the Blaugrana were then stunned by Valencia in the Copa del Rey final.

With the signing of Griezmann, Lionel Messi and Co. will be expected to reach the Champions League final next season, the side will be hoping to rectify their missed chances last season.

Griezmann will be welcoming the chance to challenge for all the major honours with the Camp Nou outfit..