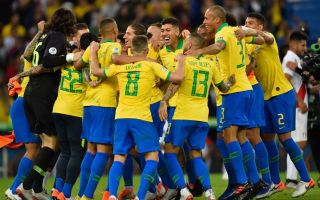 Gremio winger Everton Soares has dropped a tantalising hint about his future amid transfer rumours linking him strongly with a move to Arsenal.

The Brazil international caught the eye at this summer’s Copa America and has been linked with a number of big European clubs since then.

Goal have reported on interest from the Manchester clubs and AC Milan, stating Everton has a release clause of around £71million at current club Gremio.

That’s probably too expensive for Arsenal, but Globo Esporte have claimed that the Gunners’ new technical director Edu has held talks with Everton over a move to the Emirates Stadium.

The 23-year-old looks a necessary addition to Unai Emery’s squad if the club can get a deal done, as he’d surely be a major upgrade on the likes of Alex Iwobi and Henrikh Mkhitaryan after ineffective seasons in attack last term.

And it seems Everton is now dropping big hints over an imminent move as he is quoted by the Daily Mirror as saying he has an offer, though he won’t say who it’s from.

He goes on to say that he cannot guarantee he’ll still be a Gremio player by Thursday, perhaps anticipating things really are about to move along quickly.

“At this moment I have an offer, but I can’t say the name of the club,” he is quoted by the Mirror.

“Just like I can’t promise that on Thursday I’ll still be playing for Gremio, we’ll see.”