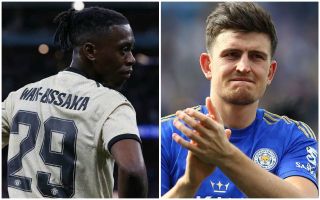 Manchester United have not done themselves any favours in their bid to sign Harry Maguire for a reasonable price after splashing out on Aaron Wan-Bissaka.

The Red Devils continue to be linked strongly with the Leicester City defender, who would undoubtedly improve this unconvincing back line at Old Trafford.

According to the Telegraph, United currently value Maguire somewhere between £50-60million, which is unsurprisingly not going down well at the King Power Stadium given that they paid that same amount for a far less proven player in Wan-Bissaka.

While it’s understandable that Man Utd were keen to spend whatever it took to land one of their top right-back targets, it does seem to continue their recent habit of over-spending.

This puts them in a weak negotiating position as clubs will be confident of getting more out of them than they might from other top teams.

Harry Maguire continues to be linked with Manchester United

It remains to be seen if an agreement can be reached, but a rather bold report from the Sun yesterday suggested Maguire was closing in on a move to MUFC, with a medical scheduled for today.

This seems a little out of step with what everyone else is currently reporting, but fans will hope some progress is being made on landing the 26-year-old.