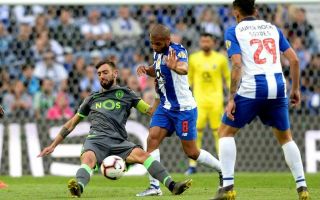 Manchester United are reportedly preparing a bid of around £50million to seal the transfer of Sporting Lisbon attacking midfielder Bruno Fernandes.

The Portugal international has shown himself to be one of Europe’s most exciting talents in recent times as he contributed 28 goals and 14 assists in all competitions last season.

That’s the kind of firepower Man Utd could do with from the middle of the park, and the Independent report the Red Devils are now set to step up their interest in a deal.

It remains to be seen if £50m will be enough for United to persuade Sporting to sell, but the Independent claim the player wants the move to Old Trafford and there is a feeling inside the club that they will eventually get their man, even if he’s likely to cost slightly more than the £50m in their opening offer.

The report explains that Fernandes has other suitors but is not necessarily a top priority target for them.

United, however, do seem to be in the market for a midfielder, which makes sense given the patchy form of Paul Pogba, while Ander Herrera left on a free transfer this summer.

The 24-year-old looks like an ideal fit for United, and perhaps better value for money than Newcastle starlet Sean Longstaff, also mentioned as being valued at a similar price in the Independent’s report.