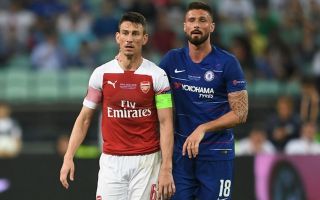 Former Arsenal striker Olivier Giroud has leapt to the defence of his long-time French international team-mate, Laurent Koscielny, claiming that the 33-year-old defender is ‘very hurt’ by the ugly contract stand-off that has developed in recent weeks.

In an interview with the BBC, Giroud remarked that Koscielny is hurt by the ordeal and that the media portrayal of him is inaccurate. Giroud would go on to say:

“You cannot make a judgement when you don’t have all the clues. I’m pretty sure we don’t know everything in this situation,” he said.

“Lolo is a good friend of mine, I’ve known him now for 10, 11 years. We played together in the second division [at Tours in Ligue 2].

“He’s been playing for Arsenal for nine years; he’s been the skipper for so many years – very respectful, very professional, always the best example for the young players.

“The club gave him the opportunity to play at Arsenal, and it was a big, big opportunity for him to show his quality in the Premier League. I think he has always been grateful about that and respectful to the club. I don’t understand how we have got to this situation.

“I feel very sad for him because he’s a great person and the media wants to give a bad image of him.

“I’m not at the club, I don’t know what really happened – but one thing for sure is Lolo is very hurt by what’s happening and he’s an emotional person.”

Giroud’s comments to the BBC come after the Arsenal captain sensationally refused to join Unai Emery and his team on their pre-season tour of the United States. It is thought that both Koscielny and Arsenal were in talks about a new contract some time in May, according to BBC Sport, but couldn’t agree on the finer details, with Koscielny being disappointed by their offer.

The defender had growing concerns about his role at the club, as well as the club’s overall direction, with talks of a previous agreement that Koscielny would be able to leave the club on a free this summer, shot down by the club. Koscielny is currently in London, continuing his pre-season training and is likely to be punished by the club upon their return to England.

Koscielny has played 353 games for the Gunners and has been captain since the start of last season following Per Mertesacker’s retirement. The French centre-back has had a turbulent last 18 months after he tore his Achilles in the 2017/2018 Europa League Semi-Final defeat to Atletico Madrid. The injury forced him out of contention for the 2018 World Cup, which France would go on to win, whilst his spell of misery was compounded at the end of May as Arsenal would lose the 2018/2019 Europa League final to Giroud’s Chelsea, failing to qualify for the Champions League in the process.

Giroud’s last 18 months, by comparison, have been a resounding success since his Arsenal departure in January 2018, having won the FA Cup and Europa League at Stamford Bridge as well as playing a prominent starting role for France in their World Cup success last summer, proving that the grass can be greener on the other side.