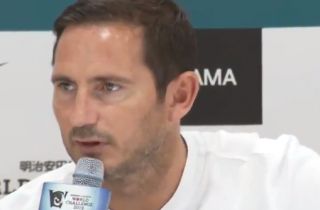 Chelsea manager Frank Lampard has delivered an exciting assessment of this Blues squad in a message that should encourage any fans nervous about the season ahead.

The former England international, speaking at a press conference, says he doesn’t feel he needs any transfers this summer as he’s so happy with the squad he’s inherited from Maurizio Sarri.

Frank Lampard expects his Chelsea players to step up with the transfer ban in place pic.twitter.com/waT77qxqCs

Lampard is an inexperienced manager, having only had one season with Derby County under his belt, but seems optimistic about what he can do with the players he’s got.

Chelsea are currently under a transfer ban, but it seems Lampard has been suitably impressed with what he’s seen in pre-season so far, so it may be that signings really aren’t needed at Stamford Bridge just now.

Eden Hazard left for Real Madrid this summer in another blow, but Lampard has also spoken of his high hopes for young players like Callum Hudson-Odoi and Mason Mount.