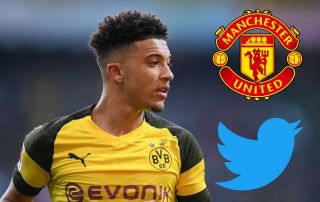 The England international is one of the most exciting young talents in world football at the moment and has regularly been strongly linked with a move to Old Trafford.

Sancho would no doubt make a fine signing for Man Utd as an upgrade on the likes of Alexis Sanchez and Jesse Lingard, and it may be that he’s now dropping subtle clues about joining the Red Devils.

As reported here by the Daily Mirror, the 19-year-old sent United fans into overdrive with a tweet to Man City star Raheem Sterling.

In a tweet that has since been deleted, Sancho asked Sterling: “What’s the “Location” next summer bro”.

Many MUFC fans took this to mean he was talking about joining his fellow England international team-mate in Manchester.

However, he later replaced this tweet with a similar message stating: “Location video out now ft Me n @ sterling7 litness”, referencing their cameo appearances in a music video for rapper Dave for his new track “Location”.

A possible overreaction from United fans on this occasion, but links with Sancho continue to be strong, so there may well be movement for the former City youngster in the near future, even if it’s not this summer.