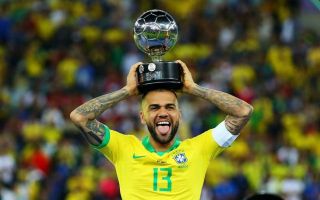 Manchester City could face some difficulty in signing Dani Alves as the Brazilian’s former club Juventus are also interested in signing him.

According to Goal, Alves’ representatives were in Turin on Monday regarding a possible return for Alves to Juventus. One of the finest right-backs in the world, Alves joined Juventus from Barcelona in the summer of 2016 but played only one season for the Bianconeri.

In his only season at Juve, Alves scored 6 goals and provided 7 assists in 33 appearances across all competitions as Juventus won the Serie A and Coppa Italia while reaching the final of the Champions League which they lost 4-1 to Real Madrid at Cardiff.

A few weeks back, PSG announced on their official website that Alves would be leaving the club following the expiration of his contract on June 30. According to Globoesporte, Manchester City are keen to sign Dani Alves and even made contact before the Copa America began. Arsenal and Tottenham Hotspur are also interested in signing Alves according to a report from Mundo Deportivo.

About his future, Alves said as quoted by talkSPORT: “Now I’m free, but I still have a lot to accomplish in my career. The only thing that I can say is that the club that sign me will sign a true champion.”

Despite being 36, Alves still has a lot left in him and he proved this through his performances at the Copa America. Alves captained Brazil to their 9th Copa America title and was adjudged the tournament’s Best Player.