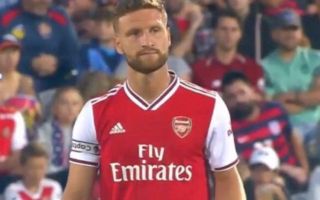 Arsenal defender Shkodran Mustafi was booed by fans when he came on as a substitute in their pre-season opener against Colorado Rapids last night.

Mustafi was one of the three players who came on as a substitute in the 62nd minute, the other two being Sead Kolasinac and Joe Willock. While coming on, Mustafi took the captain’s armband from Calum Chambers but wore it upside-down.

Arsenal fans were not thrilled to see Mustafi on the field, let alone as captain and expressed their displeasure by booing him. Several Arsenal fans defended the booing on Twitter.

One fan wrote: “Boo Mustafi. Everyday. If it forces him out – great.” Another wrote: “So glad Mustafi got booed. Literally cost us UCL last season and never seems to be serious when playing for the club. Hope this is a wake up call for him because he’s been abysmal other than the first couple months since joining.”

How is this club serious??? Mustafi captain ???? https://t.co/Gmvnvux4so

Seeing Mustafi as Arsenal captain means only one thing…
“the end is near” pic.twitter.com/o2aDayHvJw

Mustafi was our captain?! Are we a joke to you guys? @Arsenal ? pic.twitter.com/RHp4Sg4480

However, there were many who were against Mustafi’s booing. One user named @SBeurling wrote: “Wait.. Fans booed Mustafi?? I know he isn’t good enough but ffs it’s the first pre season game and we might be stuck with him because of the koscielny situation.. We’re setting him up for mistakes and bad confidence!”

I hear Mustafi was booed by his own fans last night. It doesn’t matter if he’s bad or not because he plays for Arsenal and we don’t do that to our own players. Stay classy.

My views on Mustafi being boo’d – I understand the frustration arsenal fans are feeling and of course if you’re not performing up to a standard fit for this club then by all means receive the treatment you deserve but you can’t boo him before he’s played a single game.

I don’t think that Mustafi is good enough for Arsenal Football Club. I hope that he’s sold & replaced this summer. I’m fine with people making harmless jokes, but booing one of our own players is disappointing. Remember who you are, what you are & who you represent.

Mustafi had a poor 2018/19 season with Arsenal and given Laurent Koscielny’s refusal to travel with the rest of the squad and the Gunners’ situation in the transfer market, Mustafi will most-likely be a regular for Unai Emery in the upcoming season.

Arsenal eventually won their match 3-0 thanks to goals from Bukayo Saka, James Olayinka and Gabriel Martinelli who played his first match for the club.

The Gunners next play tomorrow night in their International Champions Cup opener against Bayern Munich at Carson.