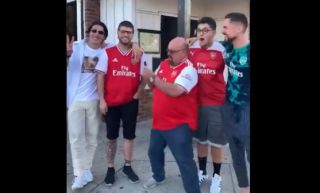 Arsenal right-back Hector Bellerin may not have played for a while due to injury, but he remains a big hit with Gunners supporters.

Watch the video below as the Spain international hilariously creeps up on a group of unsuspecting Arsenal fans to join in their group photograph.

Bellerin so often seems a very friendly and down-to-earth guy, and it’s great to see him mixing with Arsenal fans during his time out of the team.

Some of the reactions to his appearance are truly priceless as they cannot believe one of their team’s stars has appeared out of nowhere to get into their picture.