Celtic look certain to advance to the next round of the Champions League qualifying rounds following their 3-1 victory away to Sarajevo last week.

Given how strong they are at Celtic Park, it seemed like the chance for Neil Lennon to give some squad players a chance. The only big surprise is Lewis Morgan starts over Scott Sinclair who scored a wonderful back-heel last week to put the tie in Celtic’s favour.

Morgan only played in nine league games for Celtic last year, and spent the second half of the season on loan at Sunderland. This could be a huge chance for him to impress and force his way into Lennon’s plans this season.

Nir Bitton also starts out of position in central defence, meaning Christopher Jullien will still have to wait for his Celtic debut following his transfer from Toulouse this summer. The BBC reported the fee as being £7m.

The future of Anthony Ralston continues to look bleak, given the only recognised senior right back in the squad continues on the bench as Kristoffer Ajer line ups again in an unfamiliar right back role.

Mikey Johnston impressed with his positive play and brilliant goal to level the tie last week, however he will miss the game through injury. 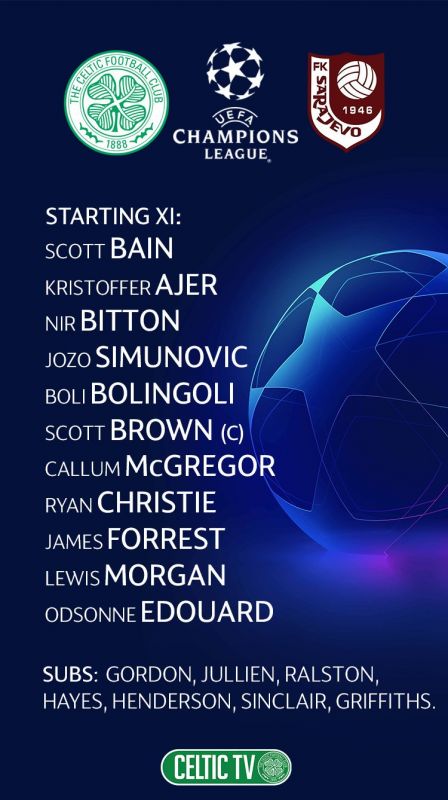 Celtic’s line up at home to FK Sarajevo

The Bosnians will need to score at least three goals in Glasgow if they are to stand any chance of advancing, and it’s hard to see Celtic not scoring at least one this evening.

The game will not be shown live on any UK TV channels.