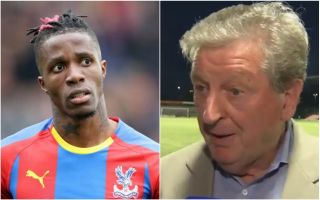 Crystal Palace manager Roy Hodgson has spoken for the first time about Wilfried Zaha and a potential summer transfer to Arsenal.

The Ivory Coast international has been linked several times with the Gunners in recent weeks, but Hodgson says the north Londoners are yet to come to them with an acceptable offer.

Arsenal fans are used to seeing their team struggling to complete with their richer rivals in the transfer market, but will no doubt have been excited to see what looked like genuine interest in an ambitious deal for Zaha.

"I don't think Arsenal have made a bid anywhere near his valuation" ?

Speaking in the video above, Hodgson seems to suggest Zaha would have his price, but has made it clear to Arsenal that Palace’s star man is not going to be sold all too easily.

He added that he hopes to see the 26-year-old back with his squad soon as he takes a little extra break after his appearances in the Africa Cup of Nations tournament this summer.

Zaha has been linked with a big-money move to Arsenal by the Daily Star and others, though they may now be pursuing a cheaper alternative as Fox Sports link them with another top attacking player in the form of Gremio winger Everton.

Zaha or Everton would surely be a major upgrade on flops like Alex Iwobi and Henrikh Mkhitaryan, who don’t look good enough to fire Unai Emery’s side back into the top four where they’ll feel they belong.