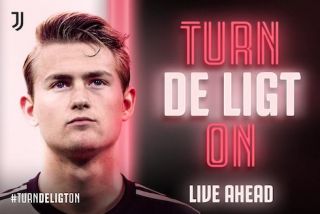 Juventus have confirmed the signing of defender Matthijs de Ligt for an initial €75m, with a further €10.5m in possible bonuses.

The 19-year-old made a huge impression last season in particular as he led Ajax to a domestic double and the semi-finals of the Champions League.

With his physicality and exceptional reading of the game coupled with his ability to build out from the back, there is little doubt that the Dutch international has a huge future ahead of him.

As noted on Juve’s official site, they will pay €75m over five years, while they could spend a further €10.5m on add-ons included in the agreement.

While that is a huge investment in itself, details of De Ligt’s new contract have also been reported after the reigning Serie A champions confirmed that he has signed a five-year deal.

According to The Guardian, De Ligt could earn a whopping €460,000-a-week if all add-ons are exercised in the agreement with the Turin giants, while it’s noted that the basic salary that he will earn is still €16m-a-year.

That is a huge wage for a teenager despite all his potential and what he has achieved thus far, but it’s a sign that Juventus were willing to invest in him and make him an integral part of their plans moving forward.

It’s another huge swoop this summer too as Maurizio Sarri appears to have a squad more than capable of continuing to dominate domestically while also making a serious bid to end their wait for Champions League glory.

Time will tell if Sarri can get the best out of them and deliver trophies, but adding De Ligt to the squad to offer not only an immediate talent to shore things up at the back and a threat in the final third from set pieces, but also given the Dutchman can be a long-term solution in that department to replace ageing stalwarts like Leonardo Bonucci and Giorgio Chiellini, it’s a quality signing from Juventus.