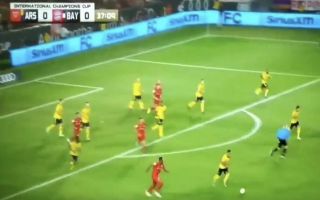 Arsenal striker Pierre-Emerick Aubameyang showed off his electrifying pace during a pre-season win over Bayern Munich in the United States on Wednesday.

The Gunners won their latest International Champions Cup fixture in Los Angeles 2-1 against the Bundesliga champions, with an own goal from Louis Poznanski opening the scoring before Robert Lewandowski levelled with twenty minutes remaining.

The scoreline looked destined to remain locked at 1-1 until Eddie Nketiah tapped into the net in the 87th minute, after great work on the left-hand side from Tyreece John-Jules.

Aubameyang also showed he is fully fit and raring to go ahead of the 2019-20 campaign, after leaving the entire Bayern defence for dead with an incredible run from Arsenal’s box to the other end of the pitch.

The 30-year-old eventually laid the ball off for Mesut Ozil, who saw his effort saved by German number one Manuel Neuer.

Check out Aubameyang in full flow below, via Twitter.

“Try catch him if you can, Pierre-Emerick Aubameyang.” ? pic.twitter.com/E4xvjUOcpq

Bet @Aubameyang7 felt like he was playing for Dortmund in yellow against Bayern. Familiar territory. ? pic.twitter.com/LWIyY63ltr