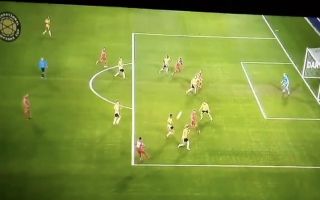 The Gunners faced off against the German champions in the International Champions Cup on Wednesday night and ran out 2-1 winners at the Dignity Health Sports Park in California, thanks to a Louis Poznanski own goal and a late Eddie Nketiah tap-in.

Unai Emery’s side might have been more comfortable heading into the last twenty minutes had Mustafi not found himself in no man’s land when Serge Gnabry whipped a cross into the box.

The German completely lost his bearings which allowed Lewandowski to power home a free header, levelling the match and setting up a nervy finish for the Gunners.

Arsenal fans have slammed Mustafi for his costly mistake on Twitter, with one supporter exclaiming ‘Kick that a****** out of my club’ after watching his latest horror show.

Mustafi is trash… Kick that asshole out my club…. Mustafi out.

Check out the 27-year-old’s error along with some more fan reaction below:

Mustafi needs to take a long look in the fucking mirror. Season hasnt even started and he already is affecting my mental health pic.twitter.com/E7b8eqlPlh

Just saw Lewandowski’s equaliser, that is why we need new CB and need to get rid of Mustafi.. He didn’t even try to block.. smh

Arsenal gotta find a way to get rid of mustafi….we cannot start the season wit him

I can’t handle another season of Mustafi. God no ?

Mustafi after ignoring his man when a cross comes into the box pic.twitter.com/i5c92KdiyJ

Mustafi after ignoring his man when a cross comes into the box pic.twitter.com/i5c92KdiyJ

Mustafi looked… Mustafi. We cannot possibly think we can rely on him for the full season.