Arsenal are edging closer to their second signing this summer, this talented star has been sensational over the summer and has the tools to lift the Gunners.

According to Spanish publication Marca, Premier League giants Arsenal are very close to agreeing a deal to sign Gremio winger Everton – the 23-year-old tricky attacker who was one of Brazil’s stand-out performers in their triumphant Copa America campaign.

The talented winger suggested that a move to the Premier League was on the horizon, by being caught learning to speak English in this video uploaded to Instagram, take a look at the clip here. 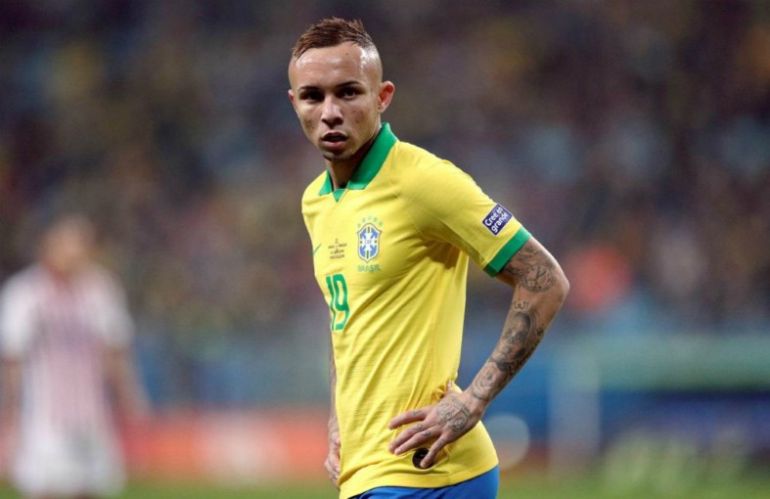 Everton looks set for a move to England.

Marca’s report also understands that Unai Emery turned to the signing of Everton after being put off by the high asking price from Crystal Palace for Wilfried Zaha.

The Gunners’ move for the ace seems to be at a very advanced stage, Brazilian journalist Sergio Araujo revealed that the north London club had sent doctors to Brazil to conduct a medical on the ace.

Much has been made of Arsenal’s reported tight budget this summer, it appears that the Gunners have worked around this issue by structuring a deal for the winger which has a high value in add-ons, according to the Sun, Arsenal will pay Gremio an initial £25m for Everton’s signature.

The deal will be boosted by £11m in add-ons.

Everton has been sensational for Gremio, managing to score 38 goals and provide ten assists in 148 appearances for the Brazilian outfit. The star has also established himself as a important player for the Selecao, winning 12 caps to date.

Arsenal seem to have landed one of the summer’s most impressive performers, with Everton putting in some sensational displays for Brazil during this summer’s Copa America. If successful, this signing should boost Unai Emery’s squad considerably.

Emery currently has very little quality wide options at his disposal at the Emirates Stadium; academy graduates Alex Iwobi and Reiss Nelson are two of the club’s only natural wide players heading into next season.