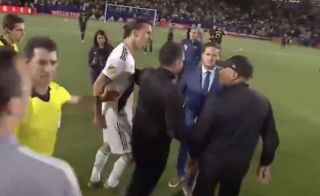 Zlatan Ibrahimovic was on top form last night in all the ways we’ve come to expect from the charismatic Swede.

Not only did the former Manchester United striker hit a superb hat-trick just after comparing himself to a “Ferrari among Fiats” in the MLS, but he then put an LAFC coach in his place too.

Watch the video clip above as Ibrahimovic quite clearly says “Go home you little bitch” in an ultimate put-down after his superb performance.

The 37-year-old truly is taking the MLS by storm in a similar manner to the way he conquered Europe for all those years.