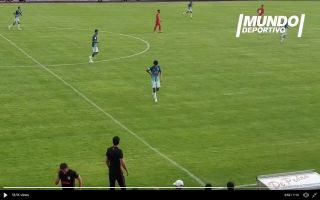 Atletico Madrid have suffered a major blow in their preseason friendly against Numancia, marquee signing Joao Felix was forced off with an injury for Atleti.

Joao Felix lasted just 28 minutes for Atletico Madrid on his debut for the Spanish giants, the superstar was forced off with a hip injury after being kneed by one of Numancia’s players.

Atleti made Felix the fifth most expensive player of all time after signing the ace from Benfica in a deal worth €126 (£113m), as per BBC Sport.

The injury didn’t look to serious as Felix was able to walk off the pitch himself, the star decided to call time on his debut after briefly attempting to continue despite the knock.

Fans shouldn’t be too disheartened by the setback as Felix did managed to showcase his talents in his 28-minute long debut, the Portugal international was Atletico’s brightest spark and showed that he the raw talent to become one of the world’s best in the future.

Take a look at the star leaving the pitch injured below:

The star did show glimpses of his mercurial talent in the opening stages of the game, take a look at this lovely chip below:

Diego Simeone will be hoping that his golden boy is back to his best as soon as possible, Felix will be expected to step up and become one of Atleti’s crucial first-team players next season, the 19-year-old will have to provide the spark for Los Rojiblancos following the departure of Antoine Griezmann this summer.