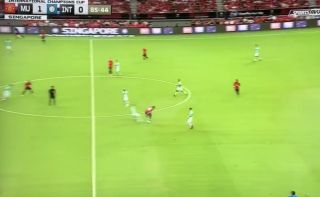 Mason Greenwood has been on fire for Man United so far this pre-season, however it seems like the young Red Devils star is much more than just a goalscorer.

Greenwood scored against Inter Milan today, adding to the strike he bagged earlier in the week against Leeds United, with the 17-year-old having now scored twice in two games this pre-season.

However, it seems like there’s more to the youngster than just a good pair of shooting boots.

In the above clip, we see Greenwood absolute tear one of Inter’s players a new one, pulling off a brilliantly timed ‘roulette’ to leave his opponent for dead.

We cannot wait to see what else the United youngster has in his locker this pre-season, and we’re sure we aren’t the only ones!