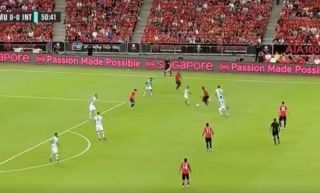 Rumours about Paul Pogba’s Man United future have been rife in recent weeks, however this doesn’t seem to have put him off at all.

The Frenchman’s situation at Old Trafford has been one of the most talked about things of this summer’s transfer window, however despite this, it looks like Pogba isn’t letting this affect his overall game.

As seen in the video above, Pogba showed just why some United fans are desperate to see him stay, as he leaves three Inter players for dead, twisting and turning before firing a shot at goal.

It was a brilliant run from Pogba, one that left those Inter stars wondering exactly just what had happened!