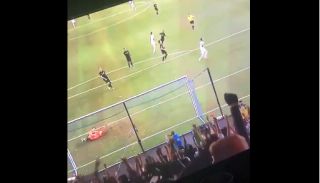 Zlatan Ibrahimovic was spotted pushing an opposition player over during his celebrations of his hat-trick goal for LA Galaxy against LAFC.

The former Sweden international had a superb game as he continues to show the MLS his qualities following a tremendous career in Europe.

Ibrahimovic scored a hat-trick then just pushes a lad clean over ? pic.twitter.com/LTbDtX7YhZ

Watch above as Ibrahimovic scores a quality third for Galaxy, only to then barge into an LAFC player who’d got in his way as he ran away to celebrate.

Are we reaching peak Zlatan as he enjoys the latter stages of his career in the US? It does seem that way.