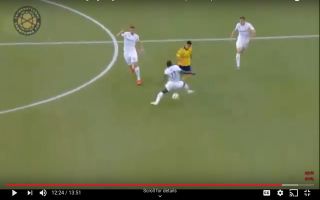 Arsenal summer signing Gabriel Martinelli is quickly winning over fans with his exciting style of play, the ace sent fans into override with this dazzling run vs Fiorentina.

In the late stages of Arsenal’s 3-0 victory over Fiorentina in tonight’s International Champions Cup clash, Gabriel Martinelli showed that he’s a serious talent for the future by demonstrating his lightning speed and superb skill on a dazzling run for the Gunners.

Martinelli picked up the ball in his own half and he looked unstoppable as he charged forward, the 18-year-old used his frightening speed to burst through, despite being surrounded by defenders. The tricky attacker then showed off his superb skills by effortlessly nutmegging one of Fiorentina’s defenders.

Unfortunately after his lung-busting run, Martinelli poked the ball just wide of the post. What a goal this could’ve been.

According to Goal, the Gunners signed the talented Brazilian for £6m.

Check out the star’s sensational run below:

Martinelli is everything Usain Bolt wished he was on the football pitch ?pic.twitter.com/8MVLeofC2S

Check out some reaction to the dazzling run below:

He’s only 18 he will be unplayable

The guy is too quick

His teammates and Opponents couldn’t keep up. Lightening quick ?

He’s too good what a young talent

Martinelli has looked like a real threat in preseason, the ace also scored for the Gunners in their clash against the Colorado Rapids. Take a look at the goal here.

Unai Emery looks like he could spoilt for choice next season, given the sensational performances of some of Arsenal’s youngsters so far in preseason.