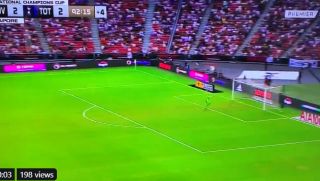 Harry Kane has just scored one of the best goals of his career as his unbelievable long-range strike wins today’s friendly for Tottenham against Juventus.

Watch below as the England international caught former Arsenal goalkeeper Wojciech Szczesny off his line and lobbed him with an inch-perfect finish from inside the centre circle.

Harry Kane from the half-way line. Take a bow. What a goal.
pic.twitter.com/DVkEnUMbhi

HaRrY kAnE iS a TaP iN mErChAnTpic.twitter.com/uaOvoMXO9q

This is truly sensational stuff from Kane, and it settled a close game between Spurs and Juventus today, with the goal making it 3-2 to Mauricio Pochettino’s men almost at the death.

Had this been a competitive match, this would surely go down as one of the best goals ever – and, to be honest, it’s still very enjoyable even if it doesn’t amount to much!