According to Calciomercato, United are leading the chase for Juventus forward Paulo Dybala, who would cost an initial fee of around £71m.

The Argentina international could be an ideal signing to help United replace flops like Alexis Sanchez and Jesse Lingard, whilst easing the pressure on youngsters like Greenwood, Chong and James to settle in slowly and not become automatic starters for such a big club straight away.

It would be intriguing to see a talent like Dybala in the Premier League, and at a total cost of £206m for the three of them, these signings instantly make MUFC’s line up look a great deal stronger in every department… 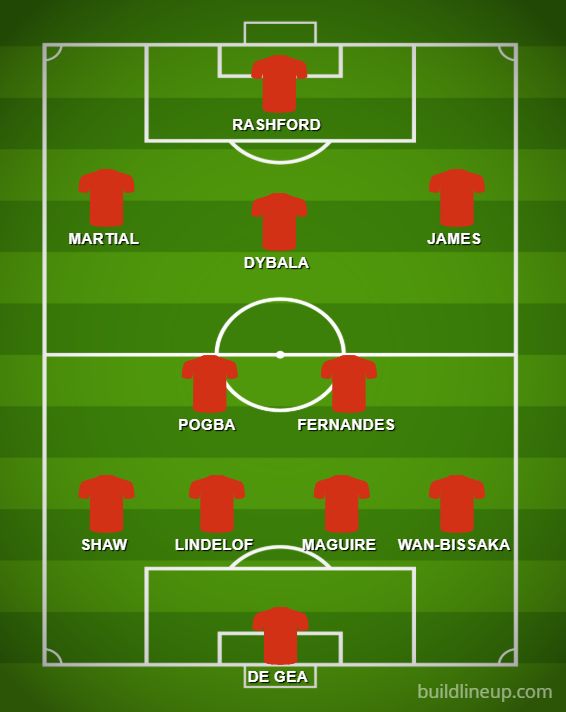 Any one of Dybala, Martial or Rashford could change positions here probably, and we imagine they might swap around a bit in a fluid Solskjaer-led side.

The Norwegian tactician seems to give his attacking players more freedom than his predecessor Jose Mourinho, and Dybala looks like someone who could be an ideal fit in such a system.

Fernandes should also fit in nicely alongside Paul Pogba, though that does look a very attack-minded midfield that might not be ideal in every single game.

In defence, Maguire and Victor Lindelof could form a fine centre-back partnership, with the Sweden international improving last season and only likely to get better with a more solid partner alongside him.

Meanwhile, Shaw and Wan-Bissaka are a superb pair of young, fast, attack-minded full-backs that give Man Utd serious strength all over the pitch in this XI.