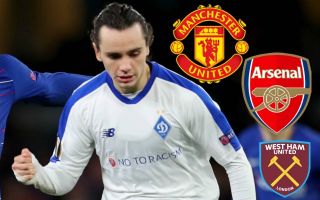 A source close to the player has told CaughtOffside that a host of English outfits – including Chelsea, Arsenal and Manchester United – have all been keeping tabs on Shaparenko in recent months.

The 20-year-old broke into Dynamo Kiev’s first team in November 2017 and has caught the eye with a number of fine displays since.

He wears Dynamo’s No 10 shirt and operates mostly in attacking midfield, although he occasionally plays further forward.

Chelsea fans have already seen Shaparenko in the flesh as he played in both legs of Dynamo’s 8-0 aggregate defeat in the Europa League last season.

He also faced England’s Under 21 side in a Euro 2019 qualifier at Sheffield United’s Bramall Lane last year, scoring with a header in a narrow 2-1 defeat by the Young Lions.

Chelsea are currently hampered by a transfer ban, leaving them unable to move for Shaparenko this summer.

But CaughtOffside has learned that Arsenal and United remain interested in acquiring Shaparenko, who has been capped four times at senior international level.

West Ham are also said to be keen on Shaparenko, who is represented by the same agency as current Hammers winger Andriy Yarmolenko.

Should Shaparenko sign for an English club during the current transfer window, he may struggle to obtain a work permit immediately. But that would only be a short-term issue which will disappear once he has played more games for his country.

One solution could be to sign Shaparenko this summer and loan him out before reapplying for a UK work permit in 12 months.

Shaparenko, who is under contract with Kiev until 2023, has scored six goals and provided four assists in 23 Premier Liga appearances in the Ukraine.