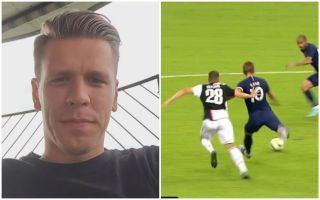 If you haven’t seen the Harry Kane goal video yet – do click and give it a watch as it’s something truly special from the Tottenham striker.

Kane launched an unstoppable effort from the halfway line to give Spurs a 3-2 win over Juventus in today’s friendly, with the strike likely to go down as one of the finest he’s ever scored.

And Spurs fans are in particularly jubilant mood about the goal due to the fact that it was scored against former Arsenal goalkeeper Wojciech Szczesny.

The Poland international played 181 games for the Gunners, one of Tottenham’s most bitter rivals, and was known for being a bit of an outspoken and cocky character.

In fact, Szczesny even took time to troll Spurs when he was out on loan with Roma, posting the video above when he saw Arsenal had managed to finish above them in the league once again at the end of the 2015/16 season – a common occurrence in those days, though it hasn’t happened since!

Unsurprisingly, Spurs fans are now enjoying rubbing this old chant in to get back at the 29-year-old as many troll the Juve ‘keeper on Twitter after that stunning Kane goal…

The best striker in the world doing that goon muppet from the halfway line is one of the greatest things I’ve ever witnessed in football #COYS #ItsHappenedAgain #Kane https://t.co/LsBkQyhh7P

And it was the twat Szcz?sny in goal ? #COYS #Kane https://t.co/CCLMnXOdeA