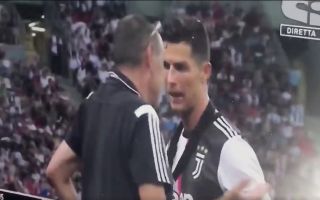 Cristiano Ronaldo appeared to be furious with Maurizio Sarri after he was substituted during Juventus’ preseason friendly against Tottenham earlier today.

Juventus superstar Cristiano Ronaldo seemed to be livid with new boss Maurizio Sarri after the Italian decided to substitute the Portuguese forward just moments after firing the ‘Old Lady’ into a 2-1 lead against Tottenham in this afternoon’s International Champions Cup.

The video below shows Ronaldo walking off the pitch before greeting one of Juventus’ coaches, the former Real Madrid and Manchester United star then briefly shook hands with Sarri on his way off the pitch, but the 34-year-old appeared to angrily say something to Sarri before walking off.

It seems that Ronaldo was seriously disappointed with his substitution and rightfully so, the Italian giants squandered their lead after Ronaldo was taken out of the game.

Tottenham were the eventual 3-2 winners thanks to a stunning last minute effort from forward Harry Kane, take a look at the England captain’s strike from the halfway line here.

Check out the touchline argument between the pair below:

Cristiano Ronaldo refuses to switch his Sarri in their first match . pic.twitter.com/amygmWlKYH

Sarri’s priority will be to smooth things over with the superstar as soon as possible, Juventus need the five-time Ballon d’Or winner to be at his absolute best if they are to mount a serious challenge for the Champions League next season.