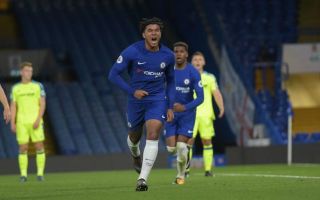 Crystal Palace are reportedly interested in signing Chelsea teenager Reece James but the Blues are not willing to let go of the 19-year old.

According to Sky Sports, Crystal Palace are interested in signing 19-year old Chelsea full-back James, having identified him as an ideal replacement for Aaron Wan-Bissaka, who signed for Manchester United this summer on a transfer fee reported to be £50million by the BBC.

The report from Sky Sports also states, however, that Chelsea are not willing to let go of James, which will surely be seen as good news by Blues fans eager to see more of their academy players come through into the first-team.

A recent report from the Daily Star claimed that Chelsea rejected a £20m bid made by the Eagles for the full-back, so it does seem clear he’s firmly in the plans of new manager Frank Lampard.

James spent last season in Wigan Athletic on loan from Chelsea, making 46 appearances for the Latics, scoring three goals and providing as many assists to show himself to be a truly exciting prospect for the future.

James is currently recuperating from a knee injury he sustained while playing for the England U20s last month. The 19-year old will miss the start of the 19/20 season but Chelsea are hoping that he will recover by September.

Chelsea currently have a top-quality right-back in skipper Cesar Azpilicueta with Davide Zappacosta as his backup. James may find it hard to be a regular under Lampard but there is surely a very good chance that the new manager will provide him with opportunities in EFL Cup and FA Cup games.

Palace will need to look elsewhere for a replacement for Wan-Bissaka, who has impressed at Man Utd and who looks like being a tough act to follow at Selhurst Park.