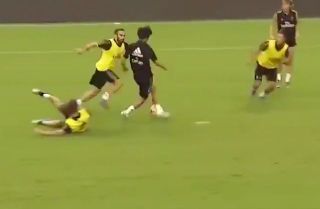 Takefusa Kubo continues to impress this summer as the Real Madrid starlet has gone viral on social media after scoring a superb goal in training.

As noted by The Sun, he earned rave reviews after his display against Bayern Munich at the weekend in a pre-season friendly.

However, the 18-year-old has continued to grab attention and could perhaps be staking his claim to play a bigger role in Zinedine Zidane’s plans this season with his impact over the past few days.

As seen in the video below, he showed dazzling skill on the ball to waltz through and produce a quality finish during training on Monday.

The technical quality and speed on show makes it clear that he’s more than comfortable with the ball at his feet, and he’ll be hoping for more chances to prove his worth moving forward as he could yet be a key squad player to offer depth as the season goes on.

Take has some of the fastest feet I’ve seen. pic.twitter.com/QACWQ1HETk