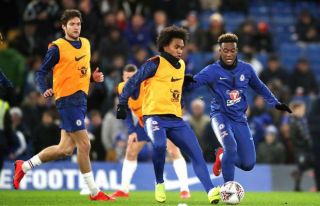 Chelsea winger Willian has said that he will be donning the No.10 shirt in the upcoming season following Eden Hazard’s departure to Real Madrid.

Eden Hazard left Chelsea this summer to join Real Madrid. This left his old No.10 jersey vacant at Stamford Bridge.

In an interview with Brazilian TV show Desimpedidos, Willian seemed to confirm that he has been offered the No.10 shirt and he’ll be donning it the upcoming season.

Willian confirming the club has offered him the number 10: pic.twitter.com/VpxSIS48EO

Willian does not necessarily seem the most obvious choice for the number, with summer signing Christian Pulisic perhaps more of a direct replacement for Hazard in the Blues attack.

The USA international is a similar style of player to Hazard, but as of yet, there is no news on what shirt number he’ll be getting at Chelsea.