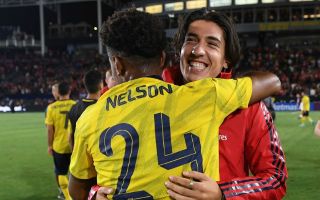 Arsenal manager Unai Emery will reportedly make a final decision on Reiss Nelson as he’s linked with a return to the Bundesliga.

The highly-rated 19-year-old looks a promising talent who could make a good impact at the Emirates Stadium if given the chance this season.

However, that does not look guaranteed and it may be that Nelson will be on the move away from the club again after spending last term on loan at Hoffenheim.

According to the Sun, Nelson is wanted by Hertha Berlin for the new season, and Emery is set to be given a choice to make on whether or not to let the player go.

Most Gooners will probably be hoping the teenage winger is kept around due to his versatility and a lack of other options in attacking midfield.

Alex Iwobi and Henrikh Mkhitaryan were hardly impressive last season and Nelson looks like he could be an upgrade in that department.

Still, despite a decent start on loan at Hoffenheim last season, Nelson struggled to keep up his fine form and perhaps still looks a little raw, with another year out on loan maybe just what he needs to develop further.