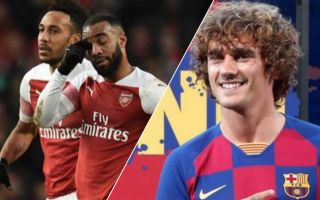 Antoine Griezmann has admitted that he’s eager to play with Arsenal and France star Alexandre Lacazette amid reports the player is a £70M target for Barcelona.

According to the a report from the Express, Barcelona have been linked with a £70M move for the player this summer, with Spanish outlet Mundo Deportivo also linking the Spanish giants with an interest in the Gunners forward.

And amid these reports, it seems like Griezmann has been talking up a potential partnership with the Frenchman just weeks after moving to the Nou Camp himself.

As per the Sun, when speaking to Sky Sports, Griezmann mentioned the Arsenal forward, as he stated that “as a player, I would like to play with Alexandre Lacazette. He’s a friend of mine off the field and we’ve played together for the national team. He’s got a lot of talent.”

It doesn’t seem like Barca need any more striking options in their squad following the arrival of Griezmann this summer, however that doesn’t mean the club won’t be making a potential move for the player in future windows.

Given the decline of Luis Suarez in recent years, we wouldn’t be surprise at all if the Blaugrana were to dip into the transfer market in the future to buy a replacement for the Uruguayan.

And if his words are anything to go off, it seems like Griezmann wouldn’t mind seeing Lacazette join him at the Nou Camp and be the man that potentially replaces Suarez in the future.