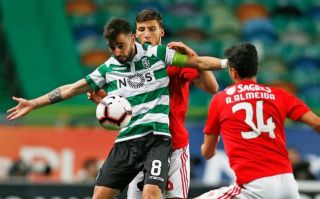 Sporting Lisbon star Bruno Fernandes has perhaps fuelled transfer rumours linking him with Manchester United after admitting he’d like to play in the Premier League.

The Portugal international has dominated headlines for much of the summer after an outstanding season in 2018/19 that saw him finish with a hugely impressive record of 28 goals and 14 assists in all competitions.

MORE: Why £20m star is poised to snub Manchester United for Tottenham transfer

As noted by the Metro, Fernandes has been linked with a potential £50million move to Man Utd, and they quote him as failing to rule out an exit from Sporting, whilst also reiterating his desire to play in England.

‘Will this be the last match for Sporting? I don’t know, it’s the coach who decides,’ he said, as quoted by the Metro.

‘I told you I’d like to play in England, but that’s not what interests me. It may be when the club decides.’

If United can get this deal over the line, it could be a superb addition to help them close the gap on the likes of Liverpool and Manchester City next season.

The Red Devils need more quality in attacking midfield after a relative lack of impact from the likes of Alexis Sanchez and Jesse Lingard, while Fernandes could also be seen as an upgrade on the inconsistent Paul Pogba.

Wherever he plays, the 24-year-old looks a potent attacking threat and surely an upgrade on most of MUFC’s current options in that department.